So you want to get into historicals..

Published by Adam Chance on November 2, 2018

So lets say you have an interest in historical gaming. You really like history and you enjoy playing popular tabletop games. You have heard that you can play historical games but you have no idea where to begin. Lets look and see what that would be like.

Say you are a big fan of the Roman empire. You really enjoyed the “Rome” TV series.

Maybe you like the “Under the Eagle” series. Ancient gaming is something you should try.

The first thing you would need would be a rulebook. There are quite a few out there. Lets say for arguments sake you talk to me and I recommend ADLG – L’Art de la Guerre.

I would recommend this ruleset simply based on its popularity. It has a large group of worldwide players, a good web presence and a active tournament scene.

The rulebook was a little hard to get, you probably had to import it. You open the rulebook and you are in luck, Rome has its own section! You turn to page 125 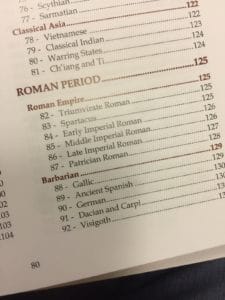 Ok, wow, being more of a “armchair historian” you didn’t realize that there were so many different types of Roman armies. Where do you even begin? You just want the ones with the cool square shields that make the cool turtle thing.

Caesar is a good starting point because of his place in popular culture. You research and find out that would be “Triumvirate Roman” and is also called “Marian” in other rulesets. This isn’t what you are looking for. 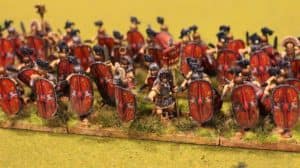 You research Roman shields. You find out they are called a scutum and the square type you are interested in come from the “Imperial period”.  So now you can begin your search for an army so you can make a cool testudo.

After searching around for awhile you find someone that carries “boxed armies” but unfortunately they don’t say what army/rules they are for and they are located in the UK so it will be a bit before they arrive. 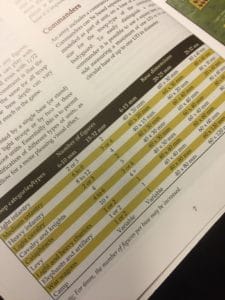 When they get in, you take a look at the basing section and it is confusing for you. After doing some research you decide on the DBx system of basing as this give you more flexibility in playing other systems.

Speaking of bases, you need some! Lucky you, this company is located in the US.

There is no denying that this process is difficult, especially for the average tabletop gamer. Most of the items you need are located across the pond and you may have to invest in additional reference material, probably from Osprey.

Even with the added expense, you have probably spent less than $200, with $50 of that being the rulebook. Its well worth it, ancient gaming is really fun and rewarding. Get involved in the tournament scene for extra fun.